GOOD FOR THE GOOSE

Sorry for the bombardment of content as of late. Whether it's via my blog, my juggernaut podcast with Thomas or my regularly updated instagram account, I can't seem to stop sharing. But hey--that's what the internet's for, right?

I've been having a reoccurring (two times) nightmare about a mutant seal with no head. It can't do anything but thrash and flop, but still it terrifies me with its tortured desperation.

It's dark in this brain of mine, readers. Lynchian, almost. (Brotha Lynchian.) But when I share it with you, it takes a little bit of the darkness away, because now you have to deal with it, too.

Fortunately, my thoughts aren't all bad. Listen to this idea I had for an ashtray. It's just a regular ashtray, but along the side it says:

"I'm dead without my coughing in the morning."

That's pretty funny, right? If you know anything about ceramics, hit me up.

As far as birding goes, I've got robin news, gosling news and grosbeak news. I'll start with the robin news, because Robin is the first-best superhero.

I was chilling at my computer the other day, trying to write a blog post while my roommate waltzed around the room examining things, yelling questions at me and telling me things that were wrong with the house, when something crazy-by-my-standards happened.

"Yo!" my roommate said. "Check out these birds!"

He wasn't bullshitting. There were two birds--robins, it looked like--clearly visible through the back window, zipping around an unremarkable but still-kind-of-dope-in-my-opinion tree in my yard that my mom's been trying to get me to cut down. (Here's a picture of it, in case you want to judge for yourself. 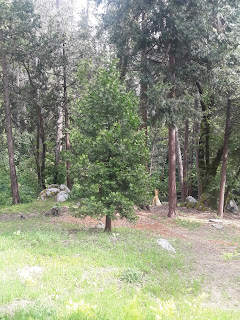 ) Breathlessly, I zipped off to my room to get my binoculars and Birds of Northern California guide, while my roommate did commentary.

Sure enough, they were robins. The guide confirmed it. And they were ferrying tiny sticks to the tree.

"Isn't that cute?" I said in an I'm-a-dumb-girl-who-likes-cute-stuff voice. "They just fell in love, and now they're building a new home together to raise a family in." It was kind of cute too, if you imagined them doing human things like smoking or getting drunk.

But there was trouble in paradise. As the old birder saying goes: "joy is fleeting because jays are fast." The merry robins (<--this is a reference to the film MARY POPPINS, which has a robins nest in it) were soon interrupted by a very violent jay, who rapiered them mercilessly with his beak, bringing nest construction to a a literal screeching halt.

"Hey" said my roommate. "Do you want to get sandwiches?"

The next day, my mom brought up the tree.
"What's so special about it?" she said. "It's not contributing anything. All it's doing is robbin' you a view.
That jostled me. "Funny you should say that" I said. "There's a pair of robins that just moved in. They're building a nest there."
That jostled my mom. "No way" she said. "They wouldn't build a nest there. The branches are too sparse."
"It's true" I said.
"Show me" she said.

I didn't actually have a lot of faith that we were going to find evidence of the robins. The jay had scared them off, after all. I had that geared up as an excuse.

"Look low to the ground" my mom said. "A lot of people think that bird nests are going to be up high in the trees, but most of the time they're right at eye level."

We looked at eye level.

Somehow, the robins had finished it. It wasn't a beautiful nest, but it definitely wasn't a random pile of sticks. We checked for eggs, but there weren't any.

The day after that, I was in the yard with my neighbor, drinking beer.
"There's a nest in that tree" I said, pointing to the tree.

"There ain't no nest" said my neighbor. (He sounds southern when he's skeptical.) "The branches are too sparse."

But the nest was gone.

"There wasn't no nest" my neighbor said.

But there was a nest.

The gosling and grosbeak news will be faster, I promise. In fact, the grosbeak news is just that there have been grosbeaks at my mom's bird feeder recently, so we can check that off right there.

The gosling news is that the mailman was driving down my street recently, as he does, when a gosling darted in front of his car. The mailman slammed on the brakes and stepped out the truck to see what happened, and the gosling just kept sprinting down the street and quacking, like some kind of fucked up goose version of chicken little. My mom (who is popping up a lot in this post, I'm realizing) got involved, and so did one of the neightbors, and eventually they sheparded the gosling into the neighbors pool...where it was soon joined by ANOTHER GOSLING.

Fast forward a couple hours, and I'm hanging out with my mom at the creek, smoking a Gandalf-stlye pipe. She's filling me in on the gosling drama, and speak of the devil, there's a honking noise coming from the creek.

"That sounds like a gosling!" my mom says, and sure enough there's a third little gosling, swimming up the creek with all its might, looking like it's definitely going to get eaten today.

But the story ends happily for the goslings actually, because a third neighbor (sorry for making you keep track of all these characters) goes kayaking in the creek later on that day, and chances upon a gaggle of goslings--WERE THEY THE SAME? Who knows--swimming in a nice orderly line behind a fat mother goose. They looked grateful to be alive, he said. It looked like the ending of FULL METAL JACKET, he said.
Posted by Tesse Wolfson at 4:24 PM