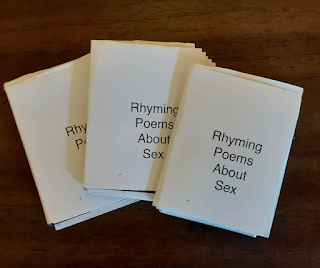 Philip G. Taylor, the tightest, most poetry poet in poetry class, who died
The regulars at the Brown Banana Books open mic
Ethan Coen (of The Coen Brothers)
Anyone who likes stupid shit

I’ll tell you this much about Katie:
She was quite the promiscuous lady
She sometimes had sex
That was very complex
But she never had sex with a baby


TO THE TUNE OF “ONE” BY HARRY NILSSON


A SONNET FOR TUB GIRL

Her face is not the reason for her fame
Though radiant, it’s seen by precious few
A mystery, just like her real name
Irrelevant to what she came to do
It’s said Christian Bale commits to a role
And Frances McDormand is fearless
What, pray, has either one done with their holes?
Compared to my girl, they are rearless
If Oakley, Annie could shoot with her fanny
If William Tell’s face was his target
If X-Men were oversexed men and Japan-y
They’d marvel to see my girl arc it
Some girls are flexible, some girls can spray
Nobody does it like tubgirl.ca

What scientists wanted to find was
What the smallest dick of all time was
They found, in a thicket
A small baby cricket
But his dick was bigger than mine was

A nosy young wife was suspecting
Her businessman husband of sexting
Indeed, texts were found
But her fears proved unsound
It was only his friend, Jeffrey Epstein

On the internet, to my surprise
I found out the government lies
It’s all over Reddit
But I just don’t get it
What kind of man fucks pizza pies?

At Burning Man once, in a tent
I was fucked in the ass by George Wendt
My wife, just that morn
Had yelled “fuck the Norms!”
But now says that’s not what she meant

I put grapes in her butt (that’s amore!)
Lie naked, supine, in the foyer
She squats o’er my face and
North Cali wine tastin’
Is what we call step number 4A

Limericks and pinner dicks:
They say there’s correlation
Vaginas treat a rhymer
Like a hostile foreign nation
My texts are full of sex
But the narrator’s not trusted
When I write and recite some
To a girl for whom I’ve lusted
My wordplay’s met with mockery
Derision, smirks and hate
The word gay’s used a lot on me
By those who surf and skate
But who’s more insecure:
The person getting mad at art
Or this old dirty wordsmith
With a song inside his heart?
Long ago I made my choice
That’s why I’m walking tall
Rejoicing in my voice, now
But it’s true, my dick is small

I know an old hippie named Rosco
Who hangs out at rock shows, and rock shows
His weed is sativa
His shoe is a Teva
But his wife is indica/Chaco

My friend told me, while drunk on Coors
That the male sex organ of boars
Is shaped like a corkscrew
And sounds, when they pork you
Like those springs that save walls from doors

My wife thought me, in bed, under-zealous
So she hired some large, muscular fellas
To cuck me, but then
One became a close friend
We hang out without her, and she’s jealous

My dick’s like a tick’s, or mosquito’s
Slight in even the tightest of Speedos
But one look in your eyes
Can expand it in size
From a munchkin’s to Danny DeVito’s


TO THE TUNE OF “CONSIDER YOURSELF” FROM THE MUSICAL “OLIVER!”

(Please read with the song playing in the background.)

I destroyed the receipts and the playbill
My voice, as I lied, sounded stable
But again I got caught
Cause I somehow forgot
The big shit you took on my glass table

My peers call me loser and nerd-o
And I’m always stargazing, ergo
If my sex past
As a star sign were cast
It would, without question, be Virgo

Due, I think, to the drugs they ingest
The loving’s not always the best
We have dirty sex
For 1 min, 30 secs
Then their penises get quite depressed

The mattress was covered in actress
Blood, cigarette butts and matches
As for the back of it?
Drenched in ejaculate
See, babe? It’s fun doing Mad Libs

Jesse Wilson is the CEO of Brown Banana Books in Grass Valley, CA (brownbananabooks.com). He enjoys reading, writing, freestyle rapping, freestyle swimming, hanging out with friends and watching adult films on his computer.